Arsenal have taken out a short-term £120 million loan ($163 million, 133 million euros) from the British government to help them cope with the impact of the coronavirus pandemic, the Premier League club announced Thursday. 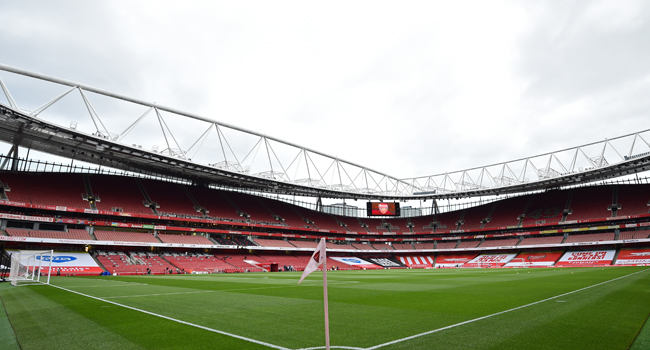 The empty stadium is pictured ahead of the English Premier League football match between Arsenal and Liverpool at the Emirates Stadium in London on July 15, 2020.
Glyn KIRK / POOL / AFP

In August of last year, the Gunners announced plans to make 55 posts in their staff redundant because of the financial hit the north London side had suffered as a result of Covid-19.

At that stage, the bulk of the club’s players had agreed to a 12.5 percent pay cut from their largely lucrative pay packets in a bid to help other Arsenal staff retain their jobs.

Thursday saw the club confirm they were utilising a scheme from the Bank of England, the national central bank, to bolster their revenue at a time when matches at their Emirates Stadium are again being played behind closed doors amid a fresh country-wide lockdown.

“As we continue to work through the implications of the global pandemic on our finances, we can confirm today that the club has met the criteria set by the Bank of England for the Covid Corporate Financing Facility (CCFF),” said an Arsenal statement.

“As a result, we are taking a short-term £120 million loan through this facility to partially assist in managing the impact of the revenue losses attributable to the pandemic.

“This is a similar approach to that taken by a wide variety of major organisations across many industries including sport, and is repayable in May 2021.

“The CCFF is designed to provide short-term finance at commercial rates during the pandemic to companies that have strong investment ratings and which make significant contributions to the British economy.”

Arsenal’s statement added that the loan was in addition to the extra financial support the club was receiving from owner Stan Kroenke, a US-based sports entrepreneur.

“The CCFF is in addition to the loan provided by our owners Kroenke, Sports & Entertainment that enabled us to refinance the debt on Emirates Stadium in August last year.”

Arsenal’s spending on transfer fees and wages in recent months has been criticised in light of the redundancies made to non-playing staff.

The Londoners splashed out £45 million ($58 million) on transfer deadline day in October for Thomas Partey and offered lucrative three-year contracts to Pierre-Emerick Aubameyang and Willian.

Arsenal have been financially hit by failing to qualify for the Champions League for four consecutive seasons.