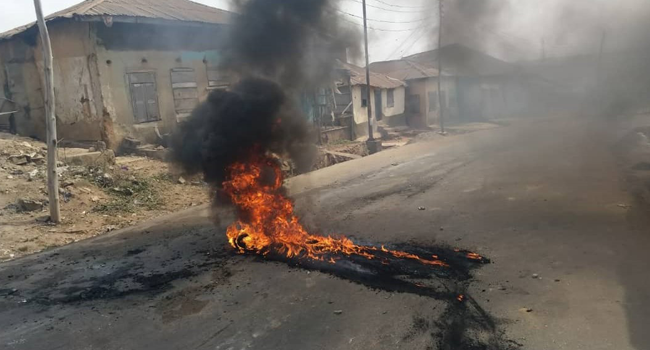 Hoodlums from these areas had set out in the early hours of Friday to loot shops and set up bonfires, the police said.

A house and about two shops were looted before the police intervened, the statement by police spokesman, Olugbenga Fadeyi, added.

The Force also said it was false that over 200 houses had been razed or 29 vehicles burnt.

“The true position of this is that no such incident happened and no such magnitude of houses and cars were burnt at Odo-Osun/Ita bale/Aderogba areas of Ibadan, the Oyo State capital,” the statement said.

READ ALSO  A Panacea for Flooding

“What really happened was that hoodlums from these areas came out in the early hours of 29/01/2021, in their usual manner, with dangerous weapons to loot shops and set up bonfires. A house and about two shops were looted.

“But the swift response of Police patrol teams doused tension and the hoodlums were dislodged.

“Routine patrols were intensified to forestall further attacks and lootings. Sequel to this, at about 20:15 hrs, the hoodlums from Aderogba area came out again and attempted to vandalize and loot shops at Beyerunka/Ogbori Efon areas. Police patrol teams and those of Amotekun were drafted to the area. During a hot chase by the teams, a cut-to-size dane gun was recovered from one of the hoodlums while bonfires set up were put out.

“The hoodlums thereafter fled the scene.

“Constant routine patrols have been intensified in those areas and normalcy has been restored. The Police are on the trail of these hoodlums to get them arrested and carry out prosecution accordingly.”