An unidentified man has reportedly jumped from a 30-storey building in Indonesia in order to evade arrest by the Police.

In a short video capturing the incident online, the man was seen dropping from a dizzying height as a crowd of onlookers screamed as they watched his fall to the concrete below. The sound of his impact as he hit the ground could be heard in the clip.

The video then resumes with the person covering the scene moving closer to take a better look at the man who, though he was alive, could barely move as he crushed an arm and his two legs as a result of the fall. Passers-by began to gather round to view the man as he tried to recover from the impact of the suicide jump.

While the caption alleges the man is a Nigerian, nothing in the video clip supports this claim. 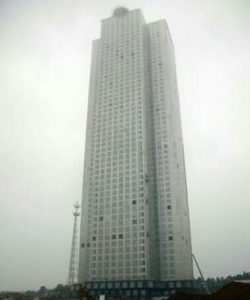