The Nigerian Government has pulled out of the ongoing World Economic Forum in Cape Town, South Africa.

This was disclosed by Personal Assistant to the President on new media, Mr Bashir Ahmad.

The government pulled out over the fresh xenophobic attacks in the country.

Mr Bashir Ahmad in his tweet on Wednesday further stressed that “VP Prof. Yemi Osinbajo was to represent Nigeria at the World Economic Forum which is currently holding in South Africa but called it off in reaction to the gruesome attacks on Nigerians”. 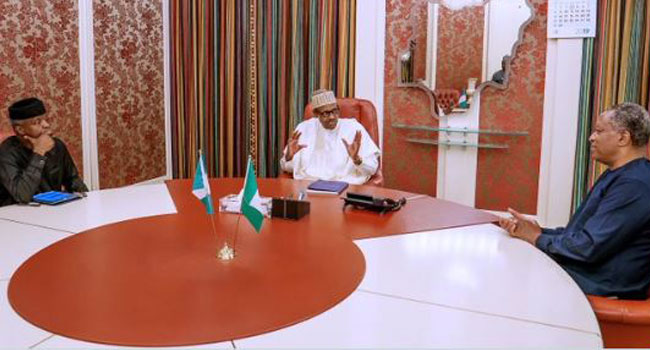 Yes sir, Nigerian government has boycotted the World Economic Forum holding in Cape Town, South Africa, but some individuals from Nigeria including a former Minister are attending on their own. https://twitter.com/ayourb/status/1169230232747945986 …

Just heard that Nigeria has also boycotted the WEF holding in SA. I am trying to confirm how true that is. Travel advice has also been issued … way to go

596 people are talking about this

God bless you Tiwa, VP Prof. Yemi Osinbajo was to represent Nigeria at the World Economic Forum currently holding in South Africa but called it off in reaction to these gruesome attacks on Nigerians. #SayNoToXenophobiahttps://t.co/qW2XUKCPx6

For the love of your people! Surprised to see some Nigerian ‘experts’ in everything governance who spend most of their time lecturing the Gov’t on empathy and the art of prioritizing national interest over individual benefits still went ahead to attend the summit. #StopXenophobia https://twitter.com/tiwasavage/status/1169133808567894016 …

I refuse to watch the barbaric butchering of my people in SA. This is SICK. For this reason I will NOT be performing at the upcoming DSTV delicious Festival in Johannesburg on the 21st of September. My prayers are with all the victims and families affected by this.

121 people are talking about this

Nigeria joins the list of a number of African countries whose leaders would not be attending the forum.

Earlier reports had it that the Presidents of the DR Congo, Rwanda and Malawi had withdrawn from the forum owing to the violence recorded in the country this week but the South African Department of International relations and Cooperation (DIRCO) has denied this.

In a statement, the department insists that all the leaders who have confirmed attendance will be doing so.

DIRCO also says that contrary to reports, Rwanda’s Paul Kagame had declined the invitation because of other pressing engagements while the other two leaders mentioned never responded to the invitation in the first place .