The N21.3 billion National Arts Theatre remodelling will be completed in the next 15 months, Central Bank of Nigeria (CBN) Governor, Godwin Emefiele announced on Sunday.

The apex bank boss spoke during the signing of Memorandum of Understanding (MoU) for the handing over of the National Arts Theatre to the Bankers’ Committee by the Federal Government in Lagos.

Emefiele said the second phase of the project would also be awarded in the next few weeks, assuring that the projects would be inaugurated by President Mohammadu Buhari before leaving office in 2023.

Themed the ‘Lagos Creative and Entertainment Centre’, Emefiele said the project  would restore the glory of an iconic building by aligning most of the fabric and equipment and facilities in the building with the aesthetics of the 21st century.

He said the Bankers’ Committee will be funding a prototype cluster located to the north of the National Arts Theatre, labelled the “Signature Cluster” consisting of a building each for Music, Film, Fashion and Information Technology verticals.

Lagos State Governor Babajide Sanwo-Olu said the project is an opportunity to write Nigeria’s name in gold for the future generation.

”What we are doing here today shows that when private and public enterprises partner, there is nothing that cannot be achieved,” he said.

Minister of Information and Culture Lai Mohammed said the National Theatre remodelling project has already been approved by the Federal Executive Council. He said for the Federal Government, the project is a win-win situation with several thousands of jobs to created and investment opportunities for the economy. 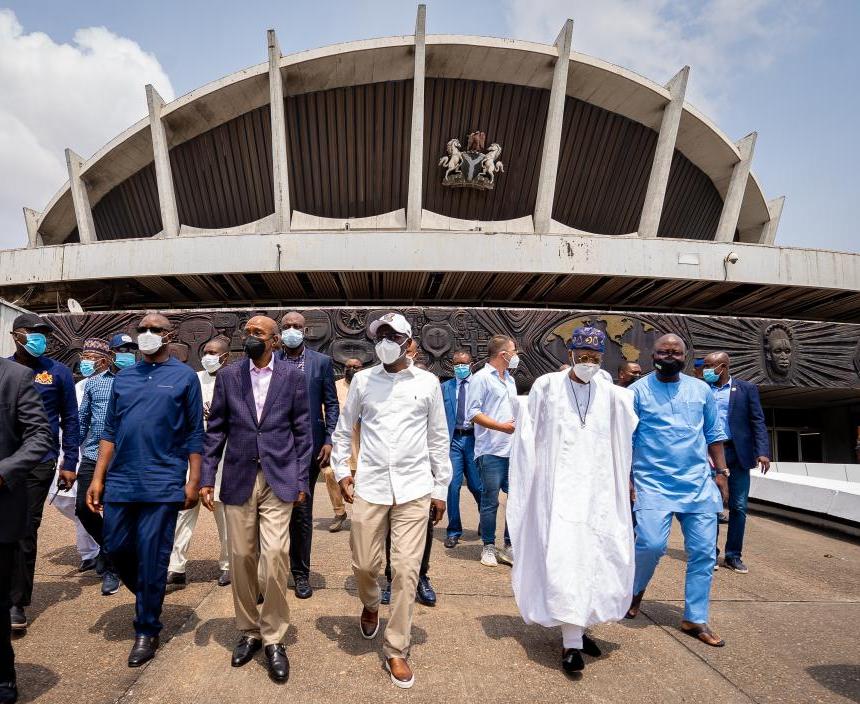 Minister of Youth and Sports Sunday Dare said the project would make huge impact in the development of the Creative Industry and support Nigeria’s economic development.

He said the signing of the contract for the restoration and refurbishment of the National Arts Theatre, Iganmu, Lagos will provide jobs for over 25,000 to 30,000 people.

He said the aim is to deliver a successful Creative and Entertainment city that will encourage additional investment into Nigeria’s creative industry.

Also,  a portion of the site has been earmarked for the construction of the “Signature Cluster”, which consists of one building each for Fashion, Music, Film and IT.

Each structure has been uniquely designed to function independently, yet co-dependently, providing the opportunity for extensive collaborations between the different creative communities.

The 44-hectare site adjourning the National Theatre will be developed and utilised for the development of purpose-built creative hubs for the Fashion Industry, Music and Film as well as Information Technology (IT).

He added that the aim is to deliver a successful Creative and Entertainment city that will encourage additional investment into Nigeria’s creative industry.